When donors establish a fund at the Community Foundation, they strive to create a legacy where they can be remembered for their contributions. Kevin Barkdoll’s family wanted to memorialize him by creating the Kevin Barkdoll Livestock Memorial Fund, so he would be celebrated for his laughter, smile, friendship and love for livestock. 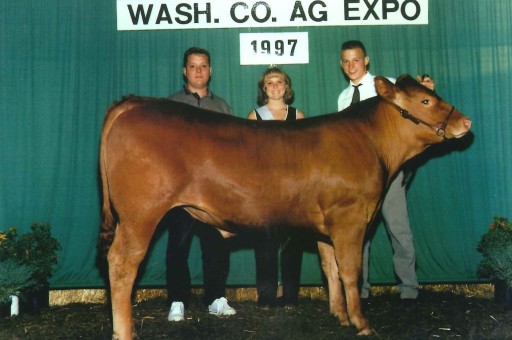 Kevin first showed dairy and pigs at the Washington County Ag Expo & Fair while in middle school. He then began showing beef once he got into high school.

“We had a neighbor who owned a farm,” said Kevin’s mom, Christine. “There were six kids, including my two boys, who would take turns raising a calf. They would give a calf to my boys for free in exchange for them raising it and pitching in on their farm.” Christine continued, “I was so impressed when Kevin and his brother, Jason, would show their cows at the Ag Expo. They worked so hard to prep them. It was amazing to watch them work.”

“Kevin ended up loving beef more than dairy. He loved getting ready for the shows,” said Christine. Kevin and Jason showed their livestock at the Ag Expo before moving onto other county fairs in Maryland, and then the Maryland State Fair in Timonium. Kevin even showed beef twice in Louisville, Kentucky, at the National Fair. After he outgrew 4-H, Kevin served as a judge at the Ag Expo. “He just loved it! No doubt, there was something about cows,” Christine said.

Kevin was born in Hagerstown in 1980 and graduated from Boonsboro High School in 1998. He received his Associate of Arts degree from Hagerstown Community College and his Bachelor of Business Administration from Salisbury University. Kevin continued his love for agriculture by working at Trans Ova Genetics, which provides embryo transfer and in vitro fertilization for beef and dairy breeders. He started with the farm team working with in-house donors and moved thousands of recipients around the country. After less than two years, he became an embryologist.

Christine and Jason Barkdoll established the Kevin Barkdoll Livestock Memorial Fund to honor him and his love for agriculture and compassion for helping others. The fund will provide financial support through a qualifying organization to a 4-H member between the ages of 9-17 to purchase an animal to show at the following year’s Washington County Ag Expo & Fair.